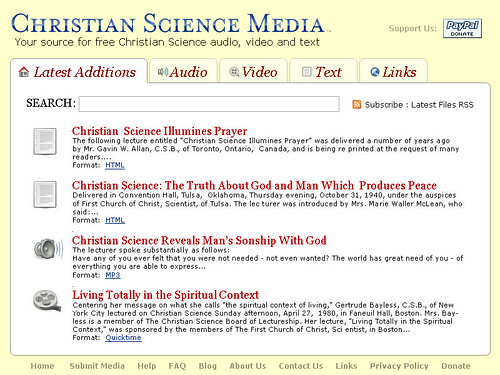 Working with Rachel on a design for a new site that would make free Christian Science Media readily available to the general public.

Coming as soon as it can. The logo font is Mrs. Eaves Small Caps from Emigre.

Well, I finally got the new WordPress theme for Bookadoodle finished and uploaded. The rooster logo was designed by Sara who also suggested the fun name and encouraged us to build out the concept. Content-wise, it is still a young blog, but, uh, check out the cool roundy corners! Yay! 🙂

Books are great. We love books. This site is for you if you love books … reading books, writing books, or just sharing your latest favorite reads.

Layout Gala: a collection of 40 CSS layouts based on the same markup and ready for download! Mar 2 2006

Good visual examples of a variety of CSS layouts (click on thumbnail to see each one in action) that all share the same underlying HTML markup. Good quick reference for simple sites I think.

In November 2005 I presented on pro.html.it a three-part article on creating CSS layouts using techniques like negative margins, any order columns and in some case opposite floats. The main goal of the article was getting the maximum number of layouts based on the same markup, each with valid CSS and HTML, without hacks nor workaround and a good cross-browser compatibility. The result is a set of 40 layouts that we’ve thought worth sharing: on each of them you’ll find also a download link (if you want, you can download the entire collection, 40 HTML pages in a single zip file). Further details can be found below the gallery.

Layout Gala: a collection of 40 CSS layouts based on the same markup and ready for download!

Another comparison matrix – this one for languages:

Perhaps you already encountered the situation – you read a bit about some less-mainstreamed language, and ask yourself : How in the world do they write an “hello world” with that?

This is where i want APLC to help. I want to collect implementations in various “languages”, for a few trivial algorithms (bubblesort etc) and applications.
I call it an practical language comparison. That said, the “languages” compared should be actual language implementations, for actual platforms – rather “GCC 3.0.4 for Linux x86 using KDE 3.2” than “C”, rather “Turbo Pascal” than “Pascal”. I’ll call these implementations languages from now on.

The comparison currently available in the form of a matrix with language X test case (may become LARGE).

The test cases are defined by me. I do by far not know all languages, especially regarding the non-imperative ones.
Feel free to send in more test cases (together with an implementation in your favourite language), but please accept that I can’t add all, and that i may need some explanations on the mechanics…
New test cases should be made up and described similar to the existing ones.

Posted in Development, Tools | No Comments »

After tiring of over hyped ajax frameworks trying to hide the guts that make ajax programming fun I decided to share my recipe for easy to make ajax applications where you still have control over everything, but the setup of it all is handled for you. This is a basic state of mind system rather than a framework. I offer you four files and a design pattern that allows you to focus on making things happen rather than setting things up. This is designed for PHP5 but can be written for php4 if people are interested.

Neat looking Ajax library with a lot of configurability. Someone should do a matrix of all the ajax frameworks with what they offer… 🙂

This text contains the list of all methods and variables of the AdvancedAJAX (advAJAX) object. This project is available for free for both private, non-commercial and commercial usage. In case you want to receive support, contact the author.

AdvancedAJAX is a JavaScript object allowing to use XMLHttpRequest object easier and speeding up development of AJAX based projects. It consists a bound of methods helping creating queries, error handling, usage with HTML forms as well as connection timeouts and reconnecting. AdvancedAJAX (so as AJAX itself) is fully supported by internet browsers listed below:

I’ll definitely have to check this out later…

Google sitemaps turned on a new feature today. Now you have the ability to not only look at what people search for and click on to get to your site, but today you can now see what average position that phrase or keyword comes up at! This makes things sooo much easier for SEO.

In the end, the no-framework framework that Rasmus proposes isn’t so much of a framework as a coding style / approach, and he basically advocates rolling your own instead of refactoring someone else’s complicated framework. Still, some good points and worth checking out, good comments at the bottom too…

Try to avoid using include_once and require_once if possible. You are much better off using a straight include or require call, because the *_once() calls are very slow under an opcode cache. Sometimes there is no way around using these calls, but recognize that each one costs you an extra open() syscall and hash look up.
…
Nothing is going to build your application for you, no matter what it promises. You are going to have to build it yourself. Instead of starting by fixing the mistakes in some foreign framework and refactoring all the things that don’t apply to your environment spend your time building a lean and reusable pattern that fits your requirements directly. In the end I think you will find that your homegrown small framework has saved you time and aggravation and you end up with a better product.