I’ve been using vSocial more and more lately to watch clips and my main man Shanti recently got a chance for a full-blown interview and posted it over on Ajax Blog. You should definitely check it out since they’ve been scaling massively lately and you can watch cool videos on their site.

We wanted to pick the brains of the vSocial founding team and learn about: starting a new social networking site, building a large-scale, high-bandwidth web app, developing with Ajax, building traffic/buzz, life hacks, and more.

The numbers speak for themselves: vSocial has gone from 0 to 71M monthly page views, 270K unique daily visitors and 45M videos served a month … all in about 120 days!

Brad Webb and Mark Sigal of vSocial were kind enough to sit down with Ajax Blog for the following interview. Enjoy!

Can you describe how the company or concept behind vSocial.com came about?

The core platform behind vSocial was developed over the past three years (with vSocial’s other co-founder, Brent Oesterblad) as part of a general purpose social media platform for uploading and sharing pictures, music, movies and other rich media content items. Looking at the market mid-last year, it was clear that Internet video was about to hit in a big way, and we felt that we had a lot of “secret sauce” to bring to the equation so we opted to focus there. The underlying platform is quite feature rich, and we expect to roll more of it out into the market in the coming months.

Read the rest of the interview: How vSocial Went from 0 to 71 Million Page Views in (about) 120 Days | Ajax Blog 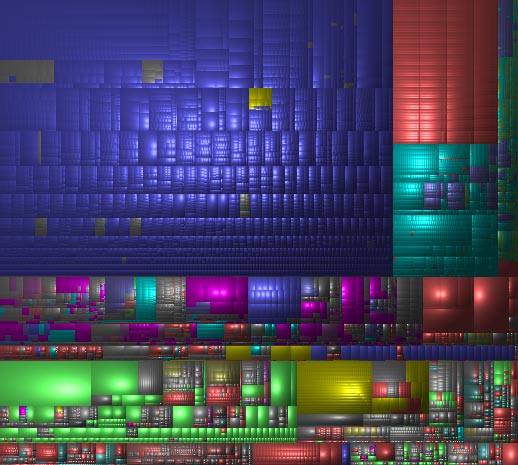 I just found a bunch of files that could be safely deleted. This is the graphic of my disk usage pattern. I reclaimed up over 7GB of disk space – a lot of it in caches, old mailboxes that I had moved, and more. The WhatSize application was especially helpful, since it basically gives you exactly what you want – a sorted list of each folder on your hard drive, sorted by size of the contents, and lets you drill down and see exactly which file(s) are taking up so much space on your system. Highly recommended!

Read all the tips here.

Check this out – neat cellist playing a lot of different parts all at once.

This is a pretty amazing video of Ethan Winer playing 37 separate cello parts to create one song. He even plays the percussion parts on his cello. It was recorded on 23 tracks using 37 plug-in effects. He spent hundreds of hours on this project so its worth a listen.

For sure, the best part of the video was his cat with an angel halo. And the part where WOW! zooms onto the screen. The music is pretty nice too… 🙂

QuizFarm.com :: Your Ultimate Sci-Fi Profile II: which sci-fi crew would you best fit in? Feb 16 2006

Your Ultimate Sci-Fi Profile II: which sci-fi crew would you best fit in? (pics)
created with QuizFarm.com

Posted in General | No Comments »

Disregard the dubious spammy-looking presentation of the links in this awesome resource full of design patterns for all kinds of interaction situations. This has some freaking sweet content.

Check it out: www.welie.com — patterns in Interaction Design

Ethnio is a simple moderated usability application that allows you to easily conduct usability test sessions right from your desk or anywhere you have an internet connection and a phone. It’s made by usability people, for anyone interested in conducting their own remote usability studies.

There seems to be an inherent paradox in saying that you need to think about your server-side architecture but you should just be building old-fashioned page by page submissions before hijacking them with Ajax. But the paradox can be resolved if you think about Hijax this way:

* Plan for Ajax from the start.
* Implement Ajax at the end.

If you build your Ajax apps like that, you can have a Web 2.0 app and a Web 1.0 website, as recently tested by Chad Dickerson. He ran two Ajax apps (Gmail and Backpackit) through Lynx, the text-based browser. Gmail fails miserably, Backpackit works just fine.

Posted in Development | No Comments »

What are the officially supported browsers that Yahoo supports? Feb 14 2006 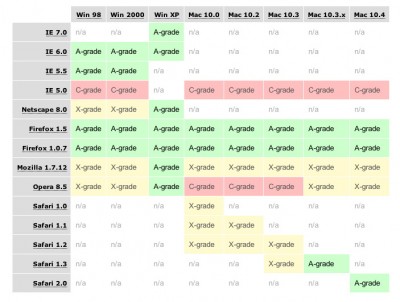 Ever wonder what browsers Yahoo! supports and how much it supports each one? This chart tells you exactly how much. “You never got fired for supporting the same browsers that Yahoo! supports…” 🙂

This table shows the grade of support that each browser receives. For more information, see Graded Browser Support.

Posted in Development | No Comments »

Man. So I was working editing the levels for the latest Christian Science podcast for Lafayette Square Christian Science Society when Audacity crashed. Save early, save often, have to remember that again with Audacity.

Anyways, it spit out this oh-so-helpful (NOT) error dialog message:

Warning
Audacity found temporary files that were not deleted or saved the last time you used Audacity.

Audacity can’t recover them automatically, but if you choose not to delete them, you can recover them manually.

Only by Googling for recover Audacity crash did I find this page which has a number of ways to try to recover your project. Unfortunately it didn’t really work for me so I’m back to adjusting levels…

The Yahoo! User Interface Library is a set of utilities and controls, written in JavaScript, for building richly interactive web applications using techniques such as DOM scripting, HTML and AJAX. The UI Library Utilities facilitate the implementation of rich client-side features by enhancing and normalizing the developer’s interface to important elements of the browser infrastructure (such as events, in-page HTTP requests and the DOM). The Yahoo UI Library Controls produce visual, interactive user interface elements on the page with just a few lines of code and an included CSS file. All the components in the Yahoo! User Interface Library have been released as open source under a BSD license and are free for all uses.